With many countries and companies now committed to net zero carbon emissions by 2030, investors may be asking themselves what they can do to achieve the same goal. Investing in companies with low carbon footprints, or who actively aim to reduce emissions, is nothing unique. But what if you could also bet against the polluters, while maintaining full exposure to equity markets?

That’s exactly what Dr David Allen intends to do with the new Plato Global Net Zero Hedge Fund. With the recent launch of this genuinely innovative fund, I took the chance to chat with David to get a better understanding of how he invests.

In this article, he explains why Australia will be forced to meet global standards whether it likes it or not, and how he uses Plato’s Red Flags model to find opportunities on the long and short sides. He also shares several ideas from the Fund, including a well-known Australian company that they’re short.

Not your average fundie

In my experience, fund managers tend to have surprisingly diverse backgrounds. But David is the first I’ve come across who’s straddled the world of sports, academia, and funds management.

After leaving Sydney in the early 2000’s, David found himself in Belfast, Ireland, playing professional rugby for Ulster Rugby. While Ulster Rugby might not be a household name in Australia, the team enjoyed significant success around this time under the tutelage of former Springboks coach, Alan Solomons.

“I wasn't the most talented kid, I didn't play Australian School Boys or anything like that. But I probably trained harder than anyone else at that point. That enabled me to get to a level that people wouldn't have expected when I was at school.”

But with professional rugby already taking a harsh toll on his body, (“at the professional level, one game is equivalent to a car crash at 60Ks per hour,” he says) David left the game and Ireland behind and moved to London, taking up a role at JP Morgan. David was lucky enough to work under Dr Chris Complin, a renowned investor in European markets, who served as a great mentor.

“The most important thing when you're young isn't how much you're getting paid. It's who you're learning from, and I was very fortunate to have him as a great mentor.”

Around 10 years later, not content with just being Head of Research at JP Morgan in London and a former professional sportsman, David decided to study again, getting a PhD in Quantitative Finance from the University of Cambridge.

Back on familiar soil

After managing award-winning hedge funds, serving as Head of Research, and then Managing Director at JP Morgan, David returned to Australia in early 2018 and took up his current role as Head of Long-Short Strategies. What’s he been working on for the last four years, you may ask?

He's been putting that PhD to good work and building out Plato’s proprietary ‘Red Flags’ model. The Red Flags model looks at over 120 unique indicators to find indicators that a company could underperform. This helps them work out not only what to invest in and avoid, but also provides ideas for short selling where comp-anies fail to make the grade.

“The genesis of the red flags model came out of an investment in a Spanish tech company around 2014. It ended up being an accounting fraud. We did a postmortem and said, "Okay, if we looked a bit harder, could we have been aware that there was a red flag there?" It was something pretty simple in this case. This company was using an auditor that no one else was using.

"If we'd known that, then potentially it would have given us pause. Bernie Madoff used his uncle in Queens (as an auditor) that no one else used either. So we got 10 years’ worth of data from 10 different countries and said, 'Okay, in every situation where a company is using an obscure auditor, on average is that a sign that that company will tend to underperform?' Indeed, it is. That was a light bulb moment. We said, 'What other red flags can we look at?' We did postmortems of all the famous accounting scandals and bankruptcies down through the years and one by one this list rapidly built up. Now we've got 126 red flags.”

These red flags include forensic accounting tools, governance issues, and much more. But David stresses that it’s the combination of these flags, rather than the strength of a single flag, that makes the tool so powerful.

“It might give you an edge like 51% versus 49%. Not much better than a coin toss. Normally, if you had one of these pieces of information, you'd probably say, "It's not that big a deal."

But when you add this large number, over 100 of independent pieces of information or piecing the puzzle together, you get something that's phenomenally powerful and is more powerful than traditional investment signals like growth or value.”

Decarbonisation is happening, whether we like it or not

“If you're in Europe, the government's been very proactive and ahead of industry. But if you're in Australia, I think in Australia the corporates are actually ahead of the government, which is a bit of an indictment on the government, that even the greedy capitalists are doing better. And I get it, when two or three duly elected prime ministers have been rolled due to the climate wars, I get it. That they're gun shy, but it's still very sad to see.”

“In Australia, we pride ourselves in so many ways on being innovators and world leaders in different areas, but we're right down the very bottom of developed nations in this. Certainly not doing our bit.”

This inaction won’t come without a price either. David points out that even if Australia was to remain obstinate on this issue, the rest of the world will be led by Europe. If Australia is producing and exporting goods by emitting a huge amount of carbon, he expects ‘equalisation measures’ (read: tariffs) to be imposed to ensure the carbon emissions are taxed. In the end, the Australian government is likely to decide that it’s better that those dollars be paid to them.

“If the Australian government realises it's going to be taxed by someone, it may as well be taxed by them.”

An equity fund on steroids

Despite the focus on net-zero emissions, David says this won’t come at the expense of great returns. With a background in hedge funds, it should come as no surprise that the Fund aims to outperform the market by four to five percent per annum. Like the well-known Plato Australian Shares Income Fund, it has a dual objective – outperform the market, while minimising exposure to carbon emissions. Unlike the aforementioned fund however, this product is aimed at a broader audience, rather than being a retirement-focused product.

It achieves this through a well-established process called ‘active extension’. This involves short selling 50% of the net assets of the fund, then taking the proceeds from those sales, and buying additional equities. This results in a 150% long, and 50% short position – if you’ve done the math, you’ll note this nets out to a 100% equity market exposure.

“What that means is that the Fund will rise and fall with the market and with other equity funds… It’s just like a normal global equity fund on steroids.”

From an asset allocation perspective, that means it belongs in the same class as normal long-only equity funds.

I’m always interested to see how these theories play out in reality, and David was kind enough to share some current examples on both sides of the ledger.

“We are long Aker Solutions (AKSO), a Norwegian company that delivers integrated solutions, products, and services to the global energy industry. They enable low-carbon oil and gas production and develop renewable solutions to meet future energy needs. This company has been in a sweet spot recently given the European energy challenges, beating their earnings guidance, increasing their guidance and increasing its book of future work. It offers decent value in the current market with a forecast FY22 price to earnings ratio of 24, with significant growth opportunities, especially in the area of offshore wind.

We are short seven companies in the global aviation sector including Qantas (ASX:QAN), Singapore Airlines (SIA), and Finnair (FIA1S) which all produce high emissions and are likely to struggle to transition to zero emissions without the help of new technology such as biofuels.

These airlines are facing renewed challenges with lockdowns re-emerging in Europe, lengthening the time it is likely to take to get back to “normal”. Our view is that business travel, which made up a significant proportion of earnings pre-Covid given the higher profit margins, will never return to pre-Covid levels given the increased comfort many people have with Zoom and other video-conferencing technologies to do business and of course the time and cost savings for companies. Not to mention the benefit to the planet through reduced carbon emissions because of less airline travel. 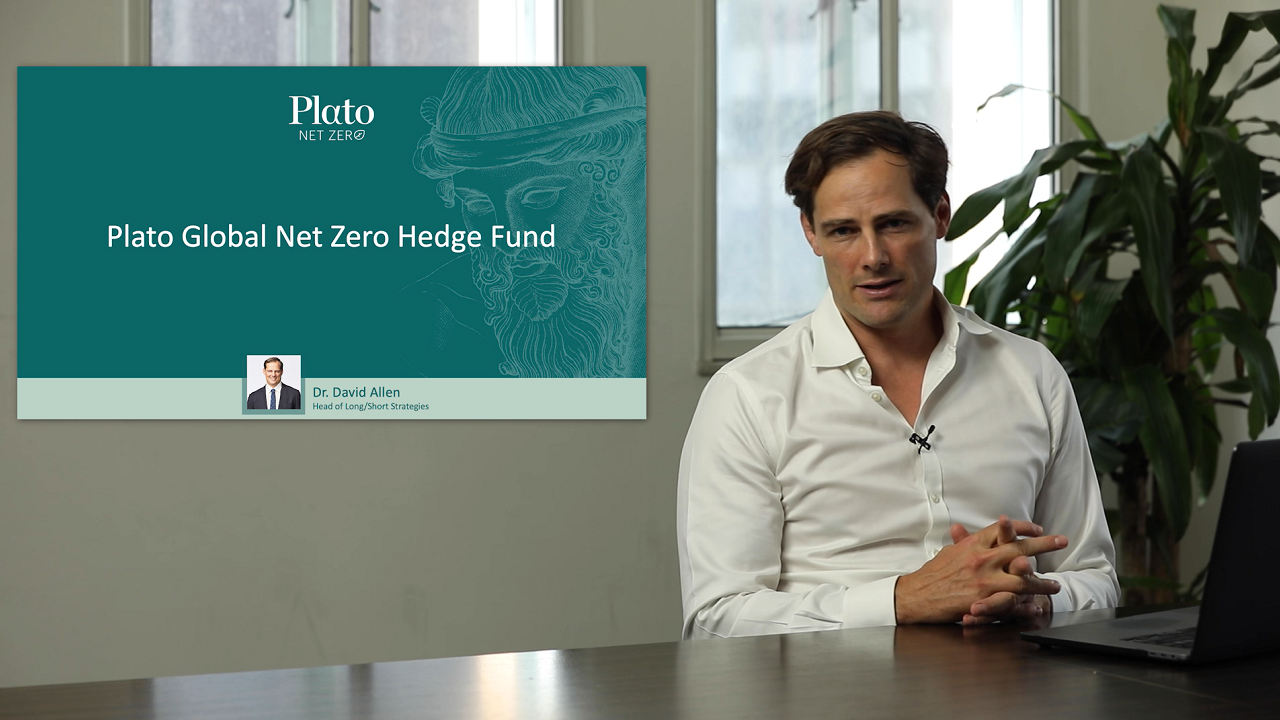 Equities
Plato's long/short net-zero strategy drives change — and profits
View
........
Livewire gives readers access to information and educational content provided by financial services professionals and companies ("Livewire Contributors"). Livewire does not operate under an Australian financial services licence and relies on the exemption available under section 911A(2)(eb) of the Corporations Act 2001 (Cth) in respect of any advice given. Any advice on this site is general in nature and does not take into consideration your objectives, financial situation or needs. Before making a decision please consider these and any relevant Product Disclosure Statement. Livewire has commercial relationships with some Livewire Contributors.
save