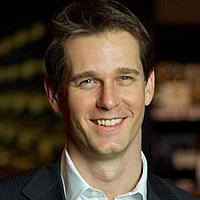 Donald Trump wasn’t at Davos, but he hung over the conference like a cloud. Six months ago, his surprise ascendancy in the Republican presidential race was fodder for late-night comedians, but now it’s a top concern in the corridors of global power.

“He’s presenting himself to the American people as a ‘turnaround CEO’”, said veteran political observer David Gergen from Harvard.  Gergen, and many others in Davos, now believe Trump to be the most likely candidate to win the Republican nomination and do not rule out his ability to win the Presidency.

Whether he wins or not, Trump has already changed the game by defining the issues this campaign is being fought on and forcing the rest of the political field to respond. From the refugee crisis to Iran, to global trade agreements – the Trump effect is everywhere.

Bono, Leonardo DiCaprio and Kevin Spacey, all added their star power to the Davos scene, but (for me) the surprise star was a politician from Estonia, little-known in Australia.

While every politician talks about reform and embracing the future, Estonian President Toomas Hendrik Ilves has done it. Estonia is perhaps the most digital country in the world. Every citizen has a unique digital identifier and can bank, start a business, sign contracts, pay taxes and even vote from their mobile phone. Digitisation delivers huge efficiencies to the health and education system. Even non-Estonians living anywhere in the world can apply for e-residency, enabling them to start a business, open a bank account and make payments online.

For Ilves, digital government is not just a policy, it’s a political philosophy centered around inclusion, competitiveness, and opportunity. Watch this space.

Delegates arrived in Davos fresh from a stock market conflagration that has wiped more than $3 trillion from global stock markets. The big debate: Are we facing another global economic meltdown akin to 2007-2008?

A number of participants warned that markets are pricing in dark facts about the global economic outlook that we may be yet to fully understand. “Market turmoil can be a harbinger that something is wrong and, even if it is irrational, can have real consequences," said Nobel-prize winning economist Joe Stiglitz.

Raghuram Rajan, the governor of India's central bank, said low interest rates had only served to lift asset prices to unrealistic levels and that there could be a day of reckoning if fundamentals don’t improve. The Fed has signaled up to 4 rate increases this year, potentially spelling more pain for equities.

Others were more optimistic. Mary Erdoes who manages more than $2.4 trillion for JP Morgan said the market volatility would be short-lived and the conditions are in place for a recovery: "There is cash in every pocket in the world, waiting for confidence in the system before they invest." There is $2 trillion of cash on the balance sheet of S&P500 companies.

Even Nouriel Roubini - Davos’s own doctor doom and the economist who predicted the last crash - doesn’t think 2016 will bring a deep crisis. “It is not going to be like 2008-09. There is not the excessive leverage in the financial system that there was last time.” That's about as positive as Roubini gets.

The World Economic Forum’s conference theme was the"Fourth Industrial Revolution" - the WEF's catch-all term for the technological changes nibbling away at the structure of our economies. "Automation", "collaboration", "disruption" all featured heavily in the program.

Just to rub the point in, the Infosys cocktail party featured a robot serving beer. Another robot conspicuously read the newspaper in the main conference centre. And just opening up your Uber app revealed the sharing economy Davos-style: #UberChopper.

But behind the gimmicks, there were serious discussions about the impact of technology on our economies. Some participants worried that the growth of automation and the sharing economy would worsen inequality ("what does a minimum wage mean for an Uber driver?"), weaken working conditions ("how does parental leave work for freelancers?") and reduce job security ("what will happen to all the bartenders, if robots can pour a beer?").

General-Secretary of the International Trade Union Confederation, Sharon Burrow said: “So, the real question is whether the wealth will be shared. Our fear is not that technology will displace jobs, our fear is that technology will be used by the few to create enclaves of greater wealth and further marginalisation and conflict.”

On the other side of the debate, ‘techno-optimists" like Vishal Sikka, CEO of Infosys, pointed out that we have dealt with huge employment transitions in the past: agricultural employment was 97% of the population just over a century ago. Today it's 3% in advanced economies, but the world isn't full of unemployed farmers. Sikka said: "the tasks that humans can occupy themselves with are limited by imagination, not automation."

The IMF started the week by predicting lower global growth in 2016, cutting their forecast to 3.4 percent (down from 3.6 percent in October). “This coming year is going to be a year of great challenges and policy makers should be thinking about short-term resilience and the ways they can bolster it, but also about the longer-term growth prospects,” IMF chief economist Maurice Obstfeld said.

Others pointed to positive signs on the horizon, including the emergence of a durable recovery in the United States and a clear commitment from European policymakers to support growth in the Eurozone. Most of the slowdown in growth is due to the deceleration in China, but even 6 or 7% growth for China’s economy today is a bigger dollar number than 10% growth in China’s economy ten years ago.

One thing that seemed to generate consensus is that most risks in 2016 are weighted to the downside. These include:

The potential for a sharper-than-expected slowdown in China. A series of policy missteps in the last few months have undermined confidence in Chinese authorities and precipitated heavy falls in equity markets.  But the point made over and over this week is that China's stock market is a sideshow: less than 1 in 30 Chinese people own stocks. The real problems to watch in China are: an extremely unbalanced economy, wasteful investment, chronic over-capacity and high debt. Emboldened by the recent weakness, China bears were out in force in Davos. Professor Kenneth Rogoff of Harvard said: “Anyone who is still telling the ‘this time is different’ story for China has their head in the sand”. George Soros said "A hard landing is practically inevitable. I'm not predicting it, I'm observing it." But he also said "China can manage it. It has resources and policy latitude, with $3 trillion in reserves."

Trouble in emerging markets. In recent years emerging markets companies have dramatically increased their dollar-denominated debts. The Bank for International Settlements calculates this now stands at $4 trillion for emerging markets as a whole, four times higher than in 2008. Now companies holding these debts are being hit by the double whammy of rising interest rates and the rising dollar. Concerned investors withdrew $52 billion from emerging market equity and bond funds in the last three months - the largest quarterly outflow on record.  "Emerging markets were part of the solution after the Lehman crisis. Now they are part of the problem," said William White of the OECD.

Geopolitical risks. An escalation of ongoing geopolitical tensions in a number of regions – Syria, North Korea, Russia, cyber-security – is affecting confidence. These risks have the potential to disrupt global trade, financial, and tourism flows.

The concern is that if any of these risks materialize, governments have few tools to respond now that fiscal space is exhausted and monetary policy has reached its limits. According to Nobel laureate Professor Michael Spence of the Stern School of Business at New York University, “it is a fragile and deteriorating situation globally, with little in the way of effective counter-measures. (VIEW LINK)

Get investment ideas from Andrew Charlton when you sign up to Livewire Markets.