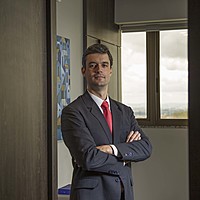 Alex has already held various executive positions in companies in the sector, as he himself explains. So, he is able to have a deeper technical understanding of uranium particularities, such as operational issues, production, licensing and jurisdiction, which gives him a different approach when investing.

Alex Molyneux curriculum gives him credibility to talk about uranium. After a decade working as a specialist mining investment banker at large banks in locations such as Melbourne, Beijing, London and Hong Kong, he took up executive positions in publicly traded mining companies, founded a uranium mining company, Azarga Uranium, and held the position of CEO of Paladin Energy during its restructuring phase.

Asked about what he considers important in the pursuit of investment objectives in the sector, Alex talked about what aspects he prioritizes in the analysis and comments on what his expectations for the price of uranium are.

Marcelo asks about the recurring assertion that excess inventory is putting pressure on the commodity and it is responsible for the current low price. Alex Molyneux draws up a detailed explanation of different types of inventory, such as those held strategically by governments and those held by utilities. He also talks about the trends he observes and the perspectives he has for each type of inventory, as well as the impact of this on the market.

Alex also comments on the long-term contract maturities and the uncovered demand for nuclear power generators with the insight of someone who was the main executive of the world’s second largest pure-play uranium company.

When questioned as to why utilities are not taking advantage of low prices to buy more uranium, Alex clarifies how they deal with price and what actually motivates them to enter into contracts. He draws a parallel to the latest bull market and lists the factors that are influencing the current scenario.

Alex Molyneux then gives his insight into the relevance of the Separative Work Units (SWUs) and what the price and volume dynamics of the spot and long-term market should look like from now on.

What price range is required for the start up or ramp up of production projects? How long will it take to reactivate the McArthur River mine? Will there be an overshooting in the price? Is it possible to cover the production deficit in the coming years? Alex gave his opinion about all of this.

When it came to KazAtomProm, Alex gave his point of view on the company’s production costs, capex, and the impact the exchange rate has on the company’s decisions. He also talked about the role KazAtomProm has as an asset to compose a uranium-focused portfolio.

Finally, Molyneux, who has worked as an investment banker focusing on mining, discusses the challenges that uranium producers could encounter if they need to obtain funding to bring projects online.

Marcelo Lopez
1st May, 19
Many thanks, Rodney. I'm glad you liked it

Get investment ideas from Marcelo Lopez when you sign up to Livewire Markets.