4 companies with the pricing power to combat inflation

If 'pandemic' and 'vaccine' were Merriam Webster's 2020 and 2021 words of the year respectively, then I'd put good money on 2022's being 'inflation'. It has been a huge topic of debate as oil prices continue to spike (petrol back at 217 cents already?) and supply chains remain constrained. Even fresh produce has fallen victim, with the price of strawberries doubling in some stores.

But don't just take it from me - for the stats heads out there, the data appears to line up.

There has been unprecedented public interest in the topic as you can probably tell by the endless media coverage. A Goldman Sachs strategist recently pointed out that ‘inflation’ is now Googled more than Taylor Swift in the UK. As for Australia:
Having run the numbers on Livewire's site (over 27,000 wires published, if you're interested), we can see that there has been a clear spike in interest in this topic over the past year. Since the first wire was published on our site in 2013, the word 'inflation' has been used in wire headlines a total of 354 times.

Notably, nearly 50% of these incidences have come since the start of 2021.

In fact, while wires in this category have historically made up only 1.2% of all those published on our site, this has so far climbed to 5.9% in 2022. Evidently, articles can mention inflation without including it in the headline. But if it does make it to the top, it's probably a pretty important deal.

All that is to motivate the thinking behind today's collection. Inflation is an expectations driven function, whereby firms will set their prices based on where they believe their costs will be. If an economy thinks inflation is inevitable - then it will probably show in future numbers. This has certainly been the case, with recent prints of 5.1% annualised inflation domestically and 8.5% in the US.

When it comes to picking stocks during inflationary environments, generally growth is treated like the plague given the implications of interest rates. However, there is one such category of stocks that are known defenders against inflation risk - those with high degrees of pricing power. This class of companies are generally able to defend their bottom lines against cost rises by lifting their own prices, protecting precious profit margins.

Accordingly, in this wire I reached out to 4 fundies to hear their favourite stocks that possess high levels of pricing power, and are set to thrive as inflation continues to seep through.

Boring can be beautiful

In this environment, boring can be beautiful. Whilst we all fixate on price increases for petrol, other major categories such as utilities, groceries and insurance are seeing extraordinary pricing but receiving limited attention. Has anyone looked at their car or home insurance bill recently?

General insurance in Australia is largely a duopoly, with IAG (ASX: IAG) and Suncorp (ASX: SUN) enjoying 68% market share and setting much of the tone for the industry. The major insurers have so many brands (25 in total) that you are inclined to think it’s competitive.

Weather patterns and natural disasters have resulted in very high claims, to the extent that insurers have barely made money. It’s the foundation for what is often referred to as a ‘hardening cycle’, a technical term for prices going up a lot (and they have – up 8%+ just for home insurance!).

Insurers are also one of the very few beneficiaries of rising rates, since they sit on a large float of customers' prepaid insurance premiums and regulatory capital ($26 billion combined). A 100 bps increase in interest rates equates to a 10% profit uplift.

This sector could well offer the trifecta, with claims normalising after a few horror years, very strong pricing power given the industry structure and need to generate returns (inflation protection), and a major kicker as interest rates move higher.

Having lived through high inflation in Zimbabwe – I learned to love businesses that have pricing power, high margins and are capital-light.

The first part of the argument is self-explanatory, in that pricing power allows a company to raise prices in line with inflation or even ahead of it.

Ideally, you also want to own companies that have high recurring revenues and where their cost or service is a very small proportion of the customer’s total cost.

Low capital intensity is just as crucial in that asset-heavy businesses will see their capital needs rise in an inflationary environment, with a corresponding hit to free cash flow. The worst combination is a low margin business with limited pricing power but high capital intensity!

As inflation rises, margins begin to fall, just as capital needs rise, resulting in a “double whammy” dent to free cash flow. The result is a company that is then forced to cover its free cash flow deficit, with higher borrowings, whilst interest rates are rising with the higher inflation.

In our portfolio Visa (NASDAQ: V) has all the attributes we look for to combat inflation and indeed potentially prosper from it:

1) It has margins in the mid-60s and estimates that over 65% of its revenues are tied to the dollar value of consumer spending. As prices rise, the dollar amount spent increases and Visa naturally extracts higher revenues. Importantly, they have a high level of fixed costs and costs rise less slowly than revenues, which results in margin expansion.

2) They are very capital-light, and the business runs with negative working capital. As a result, the higher revenue from inflation results in a natural boost to their cash flow. In addition, CAPEX is very low at around 3% of sales and fixed asset turns over 9x. The result is a business that generates very high levels of free cash flow.

Supermarkets and insurance are the two sectors that stand out in the current inflationary environment. Coles (ASX: COL) and Woolworths (ASX: WOW) are increasing prices with food inflation, and all of our channel checks suggest there is more of this to come as supplies continue to be disrupted by war, plagues, and floods. The evidence so far suggests that no one in the industry is sacrificing their margins to take market share.

We expect supermarkets will continue to be key defensive havens as inflation accelerates.

Insurance is similar in that while repair costs are rising, the pricing environment means they can be absorbed, and longer-term margin goals met. Whatever claims inflation the general insurers are seeing has already been priced into higher premiums, and we see potential for further increases. This current inflationary environment has seen bond yields rise and expectations increase for significant cash rate rises. This means that the interest earnings on the premium float of insurers are rising and will add meaningfully to profits. It is an ironic feature of insurance that customers expect increased premiums after significant claim events, as they understand the need to insure appropriately, and therefore the focus moves from price to value as the ability to claim on the policy becomes more important. Historically this has favoured the larger brands of listed insurance groups such as Suncorp, QBE and IAG.

We also see miners and energy stocks as some of the best ways to play rising inflation, but it would be hard to argue that they have pricing power.

Pricing power, but questions on CAPEX

While certainly not without its challenges, a company we like that enjoys pricing power is Brambles (ASX: BXB), a business much better positioned for the inflationary environment than a few years ago because of the pricing and surcharge mechanisms included in contracts that better allow for the pass-through of costs to customers, particularly within the US pallet business.

The most recent quarterly update highlighted this with group sales for the nine months ended 31 March 2022 increasing 8% on a constant currency basis, driven by CHEP Americas where pricing increased 13% to recover rising input and cost-to-serve costs – this excludes the income because of the surcharge mechanism that contributed an additional US$32m in 1H22. This supported an upgrade to guidance from management on a constant currency basis for FY22e of both revenue (growth of 8-9%) and underlying profit (growth of 6-7%), the latter impacted by roughly US$50m of transformation costs.

Unfortunately, it is having to buy more pallets despite flat volumes at a time of spiking timber prices (lumber represents >80% of new pallet costs), in part due to lower pallet returns as customers and manufacturers hold elevated levels of inventory given supply chain disruptions. Recovery of CAPEX inflation clearly remains a work-in-progress, negatively impacting free cash flow,

Despite not completely recovering the full combined CAPEX and operating cost impacts of higher inflation, in our view, via the pricing and surcharge mechanism, management are sensibly balancing the need of the business to maintain short-term profitability.

They are doing this while simultaneously taking a longer-term view of the customer relationship that they do not want to damage by pushing too hard on price increases, especially since they do have the life of the pallet to recoup the increased CAPEX spend.

When it comes to combatting inflation, our fundies are looking at both the traditional sectors of insurance and supermarkets, as well as beyond into payments and industrials. The dominant school of thought is the ability of firms to pass on the costs to consumers - without sacrificing demand. Finding companies with defensible market shares and the ability to maintain margins as costs rise is the key to investing with confidence in an inflationary environment.

As growth and long duration stocks continue to get pummelled, are there any defensive names you are rotating into? Or is now the time to jump back on the growth train?

In the next part of this collection, I will look into the monopolies and 'near monopolies' of the ASX that you may have never heard of (or thought of). When it comes to economic moats and earnings defensibility - there aren't many better places to look. 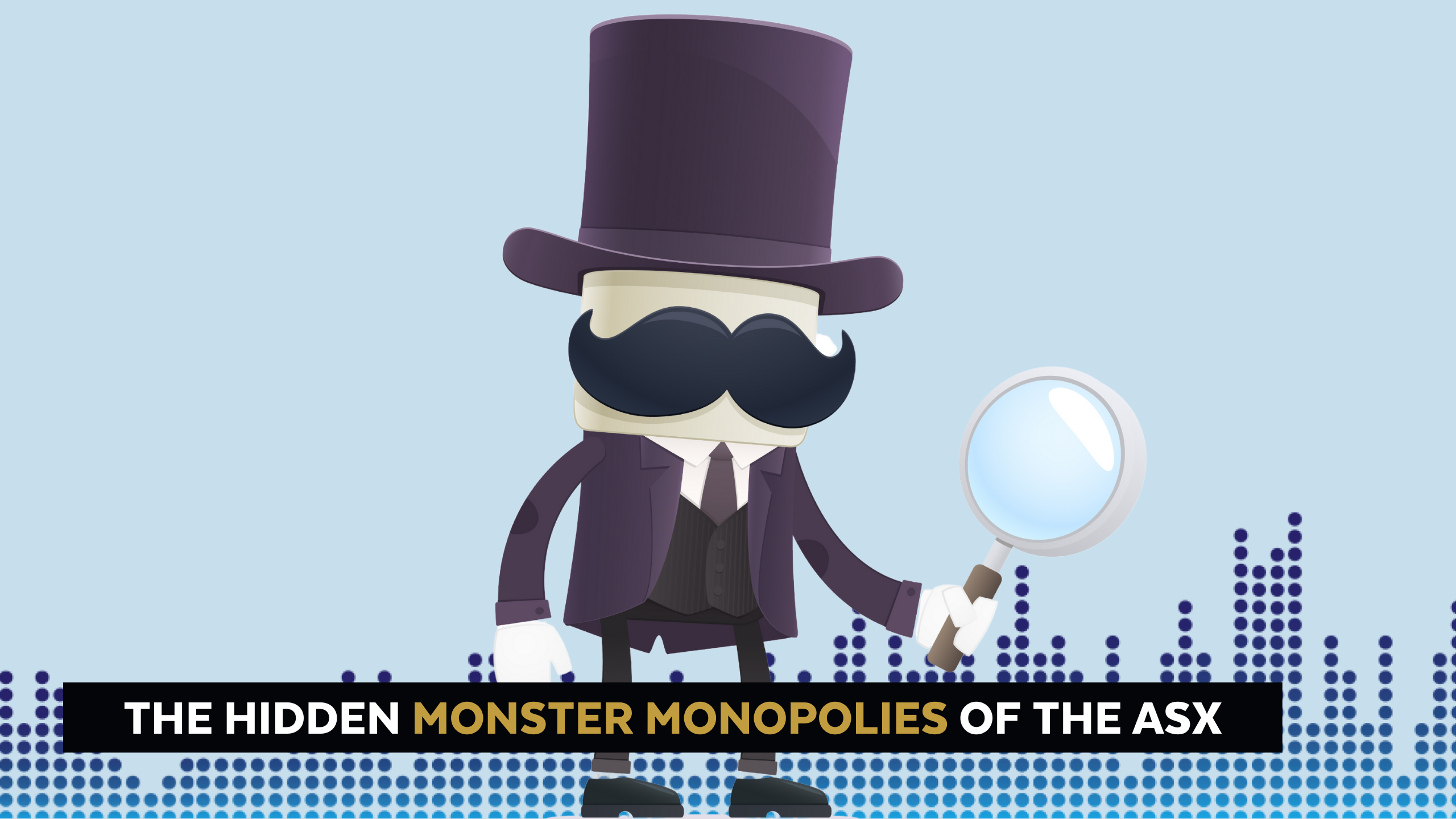 Equities
The hidden monster monopolies of the ASX
View